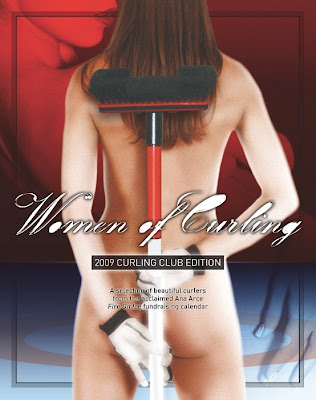 They’re back.
The gorgeous Women of Curling have returned, lensed by photographer/curler Ana Arce of Spain and produced by The Curling News in conjunction with MiCalendar.ca.

Read all about it in today’s Vancouver Sun... and the same story appears in today’s Calgary Herald, in Saskatoon and in Edmonton, and so on. You can find the full text reproduced below.

This 2008-09 16-month bonanza is more of a traditional calendar, in both size and design. Each month also offers event listings of major curling tournaments in both Canada and around the world – even for the summer months.

As the story indicates, there is some debate on the risque factor of this year’s “Curling Club” edition. We invite you to be the judge by clicking here.

Remember the calendar’s heydays of hysteria? The second edition reached a peak during the 2006 Olympics in Turin (note video story too) which also coincided with an endorsement from... Playboy magazine!

As usual, every athlete model shares in the proceeds to fund their on-ice efforts, and some in turn are continuing to support their favourite charitable cause.

Curling’s version of the Sports Illustrated swimsuit issue is making a comeback.

After taking a year off, the 2009 Women of Curling Calendar, featuring 13 female curlers from around the world, is now on sale. Like past editions of the calendar, it features nude or near-nude curlers posing with props related to the sport.

“It’s not for everyone, but it’s a lot tamer than previous calendars,” said Ryan Durham, director of business development for The Curling News, which is marketing the calendar.

Two Canadians are among the 13 models featured – Christine Keshen, who won an Olympic bronze medal throwing lead rocks for Shannon Kleibrink at the 2006 Winter Games in Turin and now lives in Invermere, and Ontario’s Chrissy Cadorin, who plays third for Toronto’s Colleen Madonia.

Keshen also posed in the 2007 edition of the calendar.

“I think this one is more risque, in my opinion,” said a laughing Keshen. “But my boyfriend (Mike DuBois) thinks it’s great. He’s the boy, he’s the expert.”

The pictures were shot by professional photographer Ana Arce of Spain, a competitive curler herself. She put out the first edition in 2006 to rave reviews. It was intended to be a fundraiser for women’s curling teams, and models receive a share of the proceeds.

Cadorin will be sharing her cut of the money with the Canadian Spinal Research Organization, while Keshen, who's taking a year off from curling, has plans to donate to youth curling groups in her hometown.

The focus of the calendar now is more on the sport than on the models, insisted Durham, noting that the calendar features a listing of major curling events around the world. “That’s another step toward producing a pure curling calendar, with action shots of the athletes,” said Durham. “We’re aiming to produce that for the 2010 Olympic year.”

The calendar retails for $34.95, including taxes and shipping and handling, and is available at www.thecurlingnews.com


Meanwhile, elsewhere in the curling world:

• Goodbyes were sadly given to Ontario curling legend Earle Hushagen over the weekend, and the Winnipeg Sun ran this obituary...

• Ted Appelman was the surprise winner of the Shootout in Edmonton while Switzerland’s Mirjam Ott defeated China’s Bingyu Wang in the women’s final. Down Brockville way, Richard Hart led his Howardless squad to victory over Kerry Burtnyk, with Marie-France Larouche defeating Eve Belisle in an all-Quebec women’s final. And in Moncton, Terry Odishaw took the Early Bird title over Russ Howard.

Action this weekend takes place in Oslo (with online streaming available through Curlingkanalen), and also in Regina ...

• Recplex curlers in Corner Brook, NL were awaiting word on their options for 2008-09, and the good news is now in ...

• Glenn Howard, who is out of the lineup as he recovers from hernia surgery, will be inducted into the Midland Sports Hall of Fame ...

• This bizarre little story in the Leduc Representative tells us a bit about Chinese curling teams training in Canada ...

• World champion skip Jennifer Jones has been busy, doing a 2009 Scottie promo-thing in Victoria (click here and here) and she’s on tap for an October KidSport appearance in Swift Current, Sask...

• Stirling had a decent curling turnout the other day ...

• Heather Rankin’s first zinger is already in the lead for quote of the year ...

• This B.C. story takes the reader through the icemaker’s tasks in installing arena ice... and we note the ice techs who frequented the late InTheHack have fully migrated over to CurlingZone ...

• Wally is the latest on The Curling Show ...

• Tellurian has a few things to display on curling history ...

• Former CCA prez and competitor Jerry Muzika was inducted into the PEI Sports Hall of Fame over the weekend ...

• Whistler Outdoors has this feature on wheelchair curling ...

• The wheelchair curling group in Elgin, Scotland is looking for sponsor help ...

What's all this 'coming over and knocking on my door and then running away'? Come inside, put your feet up and have a cup of tea. Thanks for the link anyway TCN.

Thanks for the link, though the name of the photographer bothers me. If Arce is pronounced as "Arse" (don't know if this is the case) then her name translates to "hole ass" (ana=hole in Japanese). Hmmm.